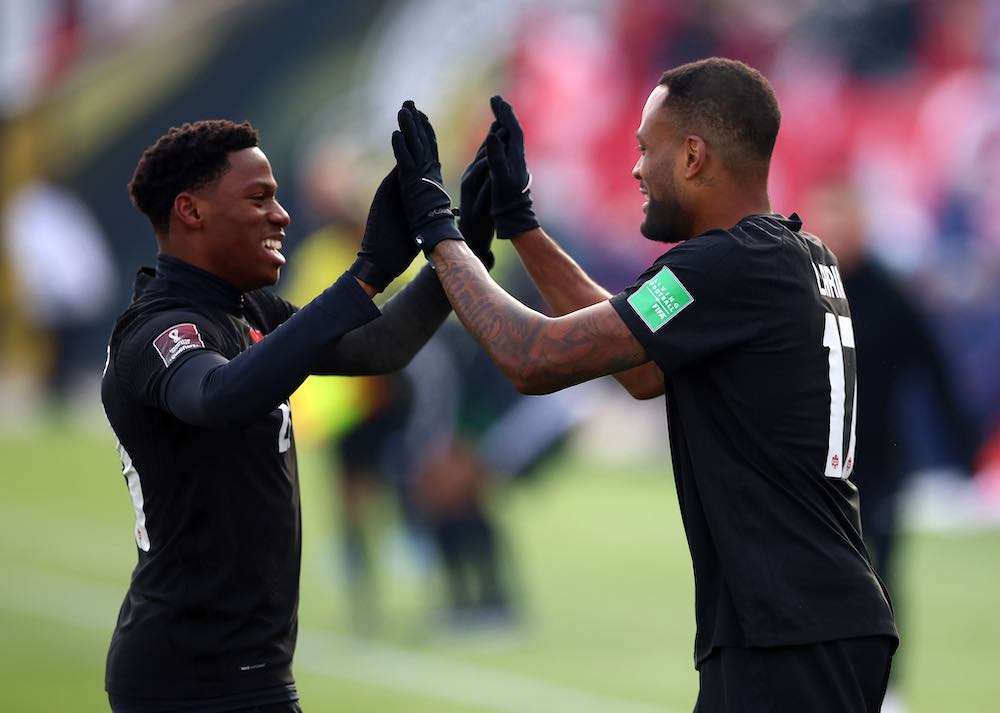 Tim Horton’s Field Hamilton, Ontario, Canada. Against the USA. The stage was set, with Canada leading the table and the USA just one point behind them, potentially the biggest matchup of Concacaf 2022 World Cup qualifying was set.

In the early minutes of the game Cyle Larin opened the scoring early, and in the process wrote his name into the record books.

This was Larin’s 23rd goal for Canada, putting him atop of the Canadian men’s all-time top goalscorers list.

Dwayne De Rosario, whom Larin overtook, congratulated him on Twitter.

Canada’s early lead came following a goal kick from American keeper Matt Turner. It was collected in a large space in midfield by Kamal Miller, who moved the ball to Osorio who quickly played it through to Larin.

Larin played a quick one-two with Jonathan David before placing the right-footed strike past Turner.

In the minutes before the halftime whistle was blown, a huge save from Canada keeper Milan Borjan kept them ahead.

Weston McKennie connected with a Pulisic corner but Borjan reacted quickly to keep Les Rouges 1-0 up at the break.

Come to the second half, there were slightly more attacking opportunities for the United States but Canada’s back line and Borjan ensured the score remained 1-0.

The rest of the second half was split, with both sides creating chances but unable to find the finishing touch.

Five minutes of extra time was added by the officials, and all was on the line for both teams. A quick solo breakaway from Sam Adekugbe in the 95th minute put the game to rest, giving Canada the three points and giving him his first goal for Canada.

“At the end of the day, I think our quality and team spirit showed through again,” Canada head coach John Herdman said at full time.

“I keep saying this is a team that will bend a bit but not break — that’s our philosophy here.”

Herdman’s team has had its highs and lows during qualifying so far, but the Reds remain unbeaten having won six and drawn four.

Adekugbe commented on his first-ever goal for Canada and the importance of the three points.

“I’m just super grateful to share this moment with my brothers,” he said. “And most importantly just happy to get another three points to step to where we want to get to.”

Les Rouges are on course to make their first World Cup appearance since 1986 with just four more games remaining in qualifying.

Can we get a little love for OUR GAFFER!? 🇨🇦❤️#CANMNT #WCQ #ForCanada pic.twitter.com/5FR8yLexop

Herdman’s side will now head down south. As he puts it: “be humble, go to El Salvador and look for three points.”