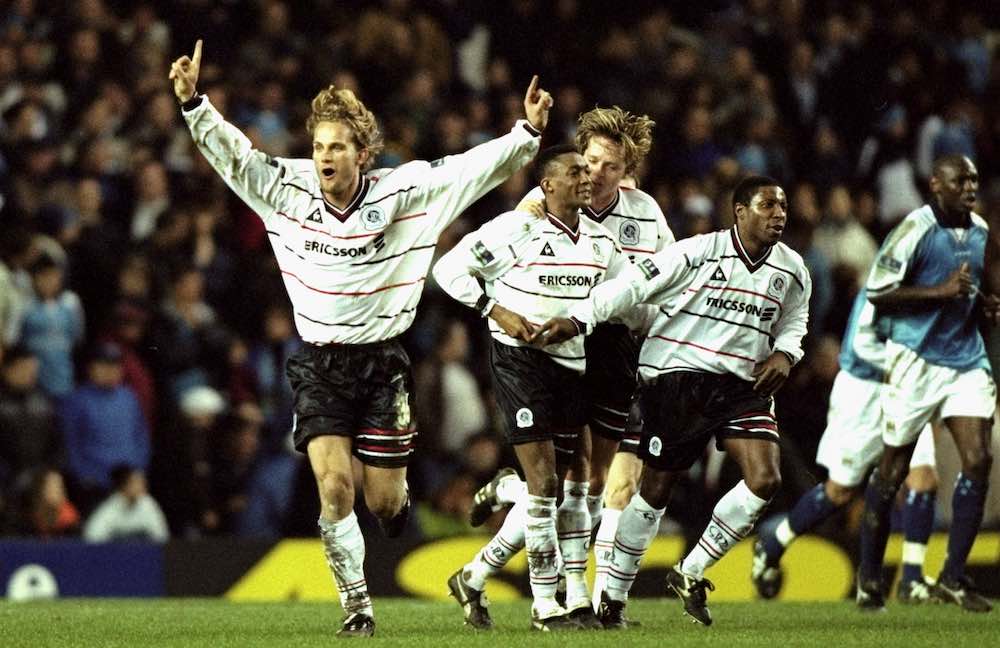 An interview with Mikkel Beck, by Callum McFadden for WFi.

You started your career in your native Denmark at Boldklubben 1909 before moving to German football with SC Fortuna Köln. What were the early years of your career like?

“I loved football in Denmark but moving to Germany was a good opportunity for me.

“The first six months are always the hardest when moving to a new country in my experience because you miss what you had. It takes time to integrate into a new culture and make new friends.

“My three years in Germany were crucial for me because I learned so much from my time playing at Fortuna Köln. I used a lot of what I learned from my time there throughout the rest of my career.”

While playing for Köln, you earned a call up to the Danish under-21 squad. Your ratio at that level was one goal in every three games. That is quite impressive, isn’t it?

“Yeah, it went well and it all happened so quickly.

“I left home to move to Germany and I was starting each week for my club. I scored goals and earned a call up. The Danish set up were always tracking me.

“I got called up to the senior squad not too long after playing for the under-21’s due to an injury to Michael Laudrup. From there, I never looked back!”

You continued your success at national level by winning Danish sportsperson of the year in 1995 and playing at Euro ’96 for Denmark. What is it like to experience a major tournament at a young age?

“It was a fantastic experience to be a part of the European Championship. I always dreamed of playing in it like many young kids do so it meant a lot to me and my family.

“Euro ’96 was a very good tournament as football was coming back to England. It is important in any tournament that the host nation does well to ensure that there is a positive atmosphere across the nation that you are in.

“England performed well at the tournament and you could sense that the whole country was behind them. I loved playing my part for Denmark in it because you could tell how much it means to players, coaches and fans alike.”

Following the European Championship, you moved to English football with Middlesbrough in the Premier League. Was it always an ambition of yours to play in English football?

“As a Dane, I always followed English football and it was one of the leagues that I wanted to play in, if it was possible. I would say that it was a dream to play in England.

“I did not hesitate when I got the opportunity.”

You worked with Bryan Robson while at Boro. He is one of the most famous English footballers of all time. What was he like to work with as a coach?

“Bryan was a good manager for the team. He helped me settle in quickly and built a fantastic team featuring Fabrizio Ravenelli, Juninho, Emerson, Gianluca Festa and myself, among others.

“He was able to motivate and convince top players like those to join him at Middlesbrough such was his standing in the game.

“He made Middlesbrough a place that players wanted to play even though it was not a club that many of us knew a lot about before joining.

“It was an interesting time at the club and Bryan had us playing attractive football. I wouldn’t want to imagine my career without that time.”

You reached the League Cup Final and the FA Cup final in 1997, against Leicester and Chelsea respectively. How do you reflect on those cup runs and the finals themselves?

“To reach both major cup finals in England with Middlesbrough was an incredible achievement. They did not turn out as we would have liked but to get to both was special.

“I remember how crazy the season was because in the cups we were flying and got to Wembley twice while being relegated in the league. The ups and downs of that season were mad.

“It was unfortunate for us as players and for the fans with how the season ended but we backed ourselves to bounce back which we did.

“An immediate return to the Premier League is ensured by winning promotion from the old First Division. You played with two English football icons in Paul Gascoigne and Paul Merson during that season.”

“They were different. Both were fantastically famous players but Gascoigne was at the end of his career whereas Paul Merson was still in his peak years.

“Paul Merson was incredible. He ended up being selected for the England World Cup squad despite playing in the Championship. That shows you just how good he was.

“I enjoyed playing with Paul Merson as an attacker. He taught me a lot and it was a joy to share the pitch with him.

“It was also great to get to know Gascoigne as a person because he could still show his quality in glimpses. He was not at his peak so I did not see the best of him but he was a fantastic guy. I am fortunate to have played with him as well.”

As well as Middlesbrough, you also played in English football for Derby County, Nottingham Forest and QPR. What were those clubs like compared to Middlesbrough?

“Nottingham Forest was only a one month loan. I actually liked the club and the people even though it was only a short time. David Platt was the manager and I enjoyed working with him.

“Derby was not so good for me. I joined the club at the wrong moment. I shouldn’t have joined because Steve McClaren had just left as coach to work with Manchester United.

“Life at QPR was good. I stayed there for a couple of months and played in an exciting team.

“I enjoyed most of my clubs throughout my career, except Derby. I just could not settle there.”

From England to France, you joined Lille in 2000. What was life in France like for you? 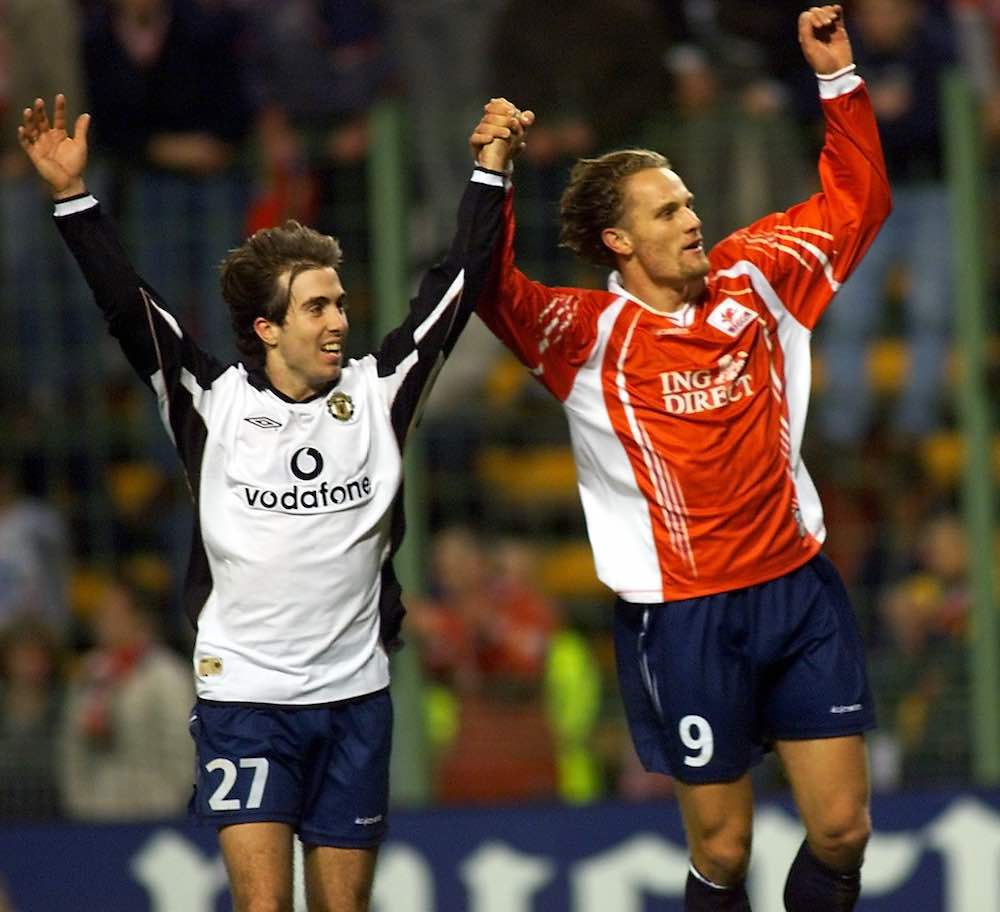 Fernando D’Amico and Mikkel Beck at Lille after a game against Manchester United.

“When I joined Lille, they had just been promoted to Ligue 1. They were a small club at that time.

“I felt that French football was the fresh challenge that I needed. It was different to English football. More tactical in my opinion.

“It was a good experience and it is great to see that Lille have progressed to become a big club in French football. I enjoyed my time there and I’ve stayed in touch with many of my teammates to this day.”

You ended your career back in Denmark at Aalborg. You scored lots of goals to end your time in football. Did you always want to return home to play again?

“It was not in my career plan to be honest. It happened quickly.

“I went on loan from Derby and it was a great place to get my love of the game back, particularly ahead of Euro 2000.

“I performed well in front of the national team coach and earned my place for the Euro 2000 squad.

“I only have good memories of Aalborg.”

Last but not least, who would you say were your most talented teammates and your trickiest opponents?

“The most talented teammates from my playing days would have to be the Laudrup brothers, Peter Schmeichel, Juninho, Fabrizio Ravenelli and Paul Merson. All fantastic footballers with real quality.

“My trickiest opponent was Marcel Desailly because he was so good at everything. He did not have a weakness in his game.

“I loved my playing days and speaking to you has brought so many memories back. I would love to still be playing today but I’m still involved in the game as an agent.

“This new role is the second best thing for me as I watch a lot of football and work with lots of fantastic players and help them professionally and personally.”