Why Is No One Worried About The Africa Super League? 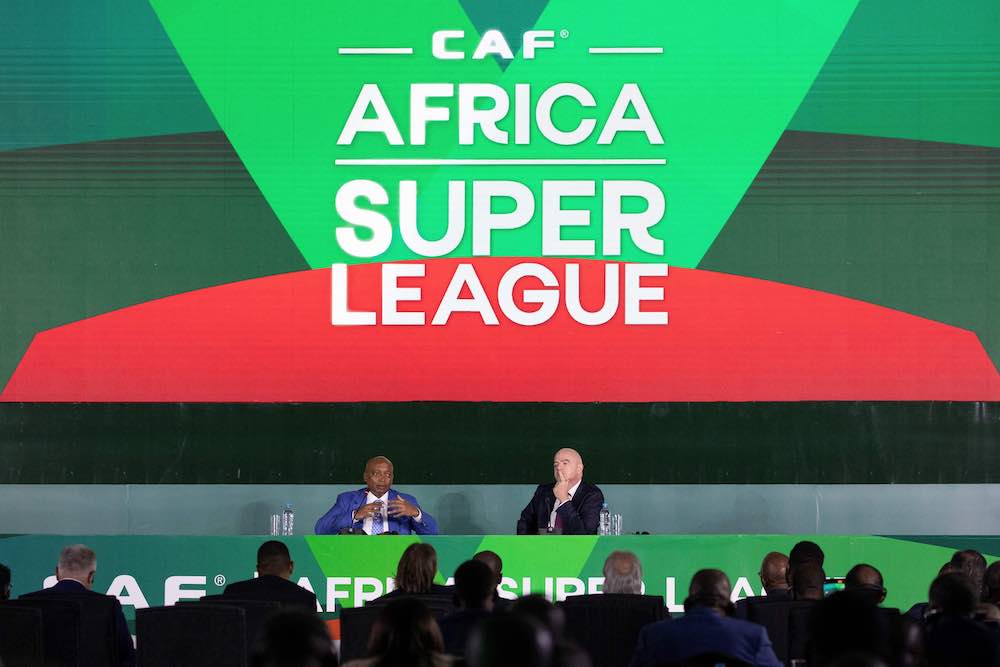 In the Covid-stricken spring of 2021, where stadiums were supporter-less, the heads of numerous prestigious football clubs announced their plans to make a breakaway, semi-closed league. There would only be 15 permanent clubs allowed in the elite league.

The once-prosperous qualification process would wither. Only a few clubs who did not buy a spot in the Super League could join. The Super League replaced the magic of the Champions League that filled TV screens everywhere with a glitzy sham that few could enjoy.

As expected, the backlash was severe. Clubs like Tottenham, Liverpool, and more issued apologies within days of the secret project getting leaked. Although the plans are probably surviving within the closeted mind of Florentino Perez and Real Madrid, the Champions League would stay for another decade or so, to the fans’ delight.

Another Super League is starting behind closed doors just miles away from Europe. Its consequences could be fatal for football and become official in a year or so.

The African Super League is coming to cripple Africa’s minnows and reward its big names, much like its European counterpart threatened to do. So why is no one worried?

How FIFA Made A Super League

The makings of the Africa Super League came three years before its European contemporary, in a Lubumbashi party.

FIFA chief Gianni Infantino, attending a TP Mazembe party, alluded to a new “Africa League” that could make at least 200 million USD. His comments made the rounds on Twitter for a day or two, but they faded away as soon as they popped up.

A 20-team, closed league that would be one of the top 10 most lucrative leagues ever? Crazy. The incredible remarks, combined with the lack of details, meant no one would take it seriously.

Three years later, Infantino was back in Africa. This time, he was at a Simba SC party, shaking hands with top African football officers. He would appear in the tweet to shake the world, along with Simba CEO Barbara Gonzalez.

It was great catching up with @FIFAcom President, Gianni Infantino on the sidelines of the #CAFElections2021. The rollout of the African Super League with 20 permanent member clubs is underway. We look forward to having @SimbaSCTanzania participate soon 🙏🏽 pic.twitter.com/hLjYMREWZG

“The rollout of the African Super League with 20 permanent member clubs is underway. We look forward to having Simba participate soon,” Gonzalez tweeted in March 2021. It was a bombshell of a tweet, one that provoked a deep, thought-provoking piece from the New York Times’ Rory Smith and Tariq Panja.

“There’s a suspicion that Gianni’s motivations may be less to do with securing the future of African soccer and more with his hopes of creating a club competition that can rival and, eventually, overtake the Champions League,” Panja said on the FIFA chief’s shady intentions.

The responses were varied. Most congratulated Gonzalez on her bargaining skills to land Simba a Super League spot. But some came out against the tide, announcing their disdain for a closed league.

But FIFA remembered the European Super League fiasco, recalling its ambitious plans for a semi-closed league with big profits and elusive spots. The backlash shocked FIFA and the league’s founding members, who stashed the plans away for a later date.

While Al Ahly lifted the Champions League title in June, CAF President Patrice Motsepe and other African officials were holding preliminary talks with club officials and tweaking the remains of the Super League project.

From then on, the plan survived in secrecy. Motsepe and a few high-ranking officials talked about the Super League from time to time. But news outlets overlooked it as clubs decided to stay quiet on their involvement with the Super League.

It’s early August. One of Africa’s best coaches, Pitso Mosimane took a hiatus from coaching amid links to a job in the Middle East. Al Ahly’s dominance ends as Wydad topples them in a controversial Champions League final. And the Super League, like a Phoenix rising from its ashes, surges back into the headlines.

Arusha, Tanzania. 10:00 GMT. Journalists like Nuhu Adams and Micky Jnr flock to the official announcement of the Africa Super League. As anticipated, there are big promises and big money tags attached to Africa’s new, premier competition.

Aside from Motsepe and his CAF crew promising big price tags to any partakers, there were some other noteworthy promises.

Each participating club needs a female team and a youth academy to play. Rather than forcing cross-continental trips from the clubs, the group stage will be regionalized. And it will be more inclusive than ever, featuring 16 countries in the group stage.

The Super League has promised football fans 197 matches in its inaugural season, three times the total number of matches in the Champions League last year.

It means teams will play a maximum of 21 games. Combine that with 30+ league matches, 5+ cup matches, and the odd tournament or three sprinkled in, and you get injuries. A lot of injuries.

It is leading to some speculating that powerhouses like Al Ahly, Wydad, and Sundowns could leave their respective leagues for the Super League. The future does not look sunny for supporters of local, mid-table teams who probably will not make it to a continental competition anytime soon. 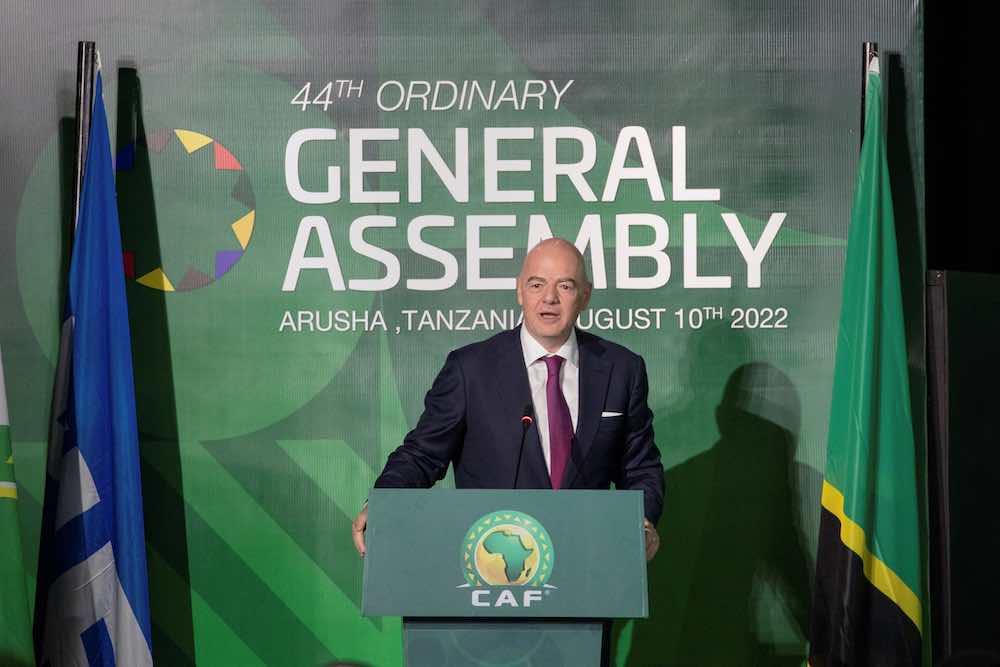 FIFA president Gianni Infantino delivers a speech during the CAF 44th General assembly at the Arusha International Conference Centre in Arusha on August 10, 2022. – CAF on August 10, 2022, launched a new lucrative $100 million Super League aimed at injecting financial muscle into the cash-strapped clubs on the continent. CAF president Patrice Motsepe announced the revolutionary competition which is supported by FIFA despite shooting down a similar initiative in Europe in 2021. (Photo by Elia Bennet / AFP) (Photo by ELIA BENNET/AFP via Getty Images)

The big question that had forums confused was where the Super League’s budget came from. Motsepe and CAF have said that they will award the winner of the Super League a whopping 11.5 million USD in prize money, only a mere million from the Champions League’s entire prize pool.

It would not be surprising to see CAF dip back into its shady ways. Yet it was still shocking to hear that Gianni Infantino and FIFA wanted Saudi Arabia to finance the upcoming Super League in exchange for the hosting rights for the 2030 World Cup.

The South/East group will have way less competition than the North group. There are only five South/East teams and five Western teams in the top 24 CAF Club Rankings, compared to 14 North African clubs.

The format will make it harder than ever for North African teams to grow against their world-beating competition.

CAF’s suggested format for the Champions League could be even worse than the Super League. After pre-qualification, the Africa Super League members and 40 other clubs will play in a March Madness-like knockout stage. If CAF uses their traditional two-legged matches, teams will play 12 matches in the tournament at most.

The shady details that have come out from the Super League: the number of matches, bribery, unconventional format, willingness to throw away the Champions League, and more, mean this tournament should not be welcomed with open arms.

Although the promise of a better Africa could be realized with CAF’s pledge to invest in the youth academies, women’s football, and the member association, CAF has not released enough details to show their trustworthiness.