Things That Scare Me About Italian Football – The Calcio Consultant 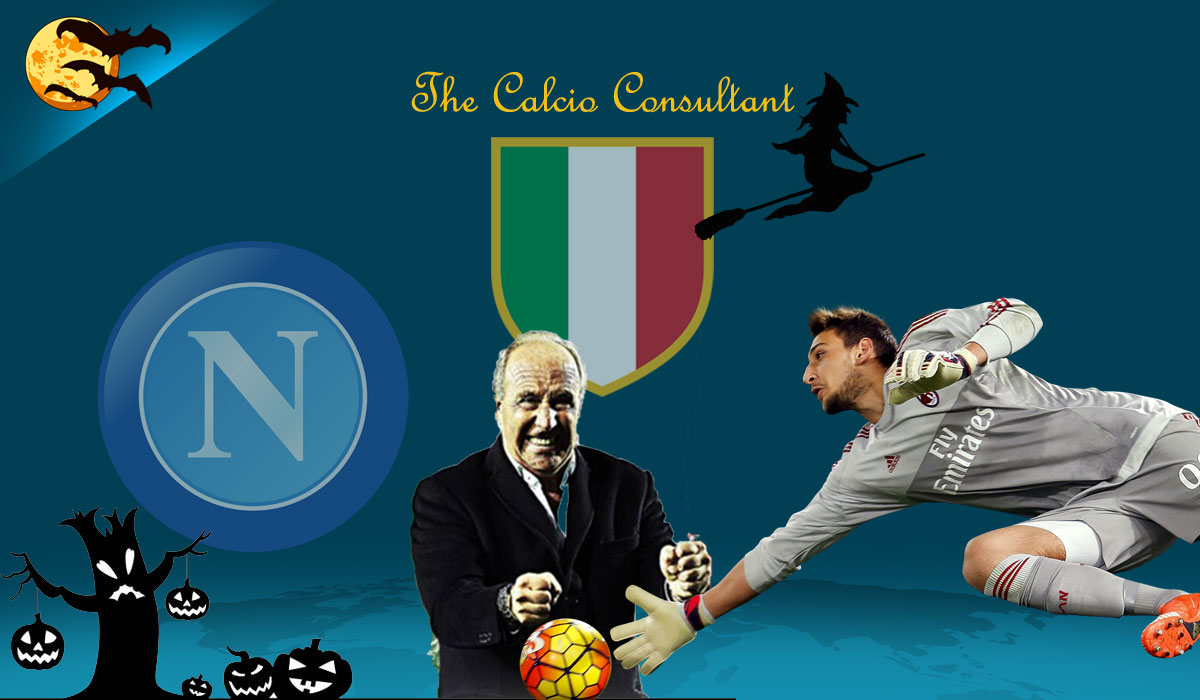 Aside from the paper ghosts hung up in my house, pumpkins, costumes for my kids, decorative spider webs, and of course the excess of candy, you wouldn’t know it’s Halloween.  It’s a big holiday around my home, as my kids are excited by the prospect of going door to door and getting treats from neighbors and friends.

Halloween, of course, comes with the element of celebrating the things that people would perceive as scary — horror movies, zombies, vampires and werewolves rule this time.

But what does this have to do with Calcio?

Yes, Italian football is going through some interesting times right now –  attractive attacking teams, a title race in Serie A, and all the usual drama you get with it on the peninsula – though in the spirit of the holiday, The Calcio Consultant has decided to reflect upon the things in Italian football that are actually scaring me.

Mind you, I’m not having nightmares or losing sleep over it, but maybe others are.  So let me bring to light a few things that are scary about Italian football.

There are some utterly miserable teams in Serie A

We all talk about the quiet rise that Serie A has been on in the last couple of years, as if she is shedding herself (finally) from the Calciopoli that ruined her over a decade ago.

Helping this rise and garnering the attention is the renaissance of attacking football that seems to be taking place in Italy.  As we say over at the Serie A Sitdown, week after week, this isn’t your father’s Serie A; the top three teams in the current table combine for 96 goals through the first 11 games.

Ciro Immobile became the first player to score 14 goals in the first 11 games of the season.  World class strikers everywhere you look are gunning for the Capocannoniere title.

However, some of this is helped by the fact that there are teams in this league that are just not any good at playing football.  Benevento, through 11 games, don’t even have a point, and it looks like they may not get one all season.

Verona and Sassuolo have been massive disappointments — two teams that boast decent attacking options but are still struggling for goals.  Udinese might be a little further up the table, but defensively have been a turnstile.  You can put together a team with 10 of your friends, and be able to score against Cagliari, and Crotone for that matter.

I’ve heard the calls from people that Serie A should go back to having 18 teams.  They just won’t do it.  I know it would make the league more competitive and the likes of Chievo would have to try harder at defending, but people who run things like money, and revenue would be lost with a decrease in games.

So unless it somehow happens, get used to teams traditionally finishing 12th-15th that have to do little-to-nothing to strengthen their squads, because the teams below them will never be good enough to mount a serious challenge.

The Milan shot-stopper seems to already have an established career, and he’s only 18.  6’5” tall, and a wingspan for goalkeepers the world over to envy, he has all the physical attributes in place to be the next great Italian goalkeeper.  However, his physical prowess doesn’t scare me.

It’s how he’s preformed since he’s come into all this money that has me worried.

Last season, Donnarumma might have been responsible for 12-15 of the points Milan got on their way to 6th and the resultant Europa League place, but I’m just not seeing the same goalkeeper this season.  There’s a bit of uncertainty in his body language, and that is something that he has to shed.  For Gigio, with big money comes big responsibility.

Maybe the presence of Leonardo Bouncci (and him being captain) leads Donnarumma to assume that there is less for him to do, but that’s far from the truth.  He’s much more passive when it comes to organizing, which smacks of passing the buck.

Goalkeepers need to have command of their defenders, and Gigio doesn’t seem to have that.

Milan’s greatest back four – Tassoti, Costacurta, Baresi and Maldini – listened to and respected instructions from their net minder whether it was Giovanni Galli or Sebastiano Rossi.  Donnarumma might still be a teenager, but he’s being paid like a seasoned veteran, and it’s time he acts like one on the pitch.  Get in Bonucci’s ear, Musacchio’s ear — demand it from them.

As for the shot stopping?  His positioning doesn’t seem to be the same.  Also, his ability to read the game his worrying.

On Gonzalo Higuain’s second goal in Milan’s loss to Juventus at the weekend, there was only one area of the goal Higuain was going to score at based on the positioning of the defenders.  Donnarumma left that post open. He has to see that’s Higuain’s scoring angle and make the save.  These were things he routinely did well before his big payday.

Oh, and the haircut.  That’s scary too.  Something from an awful early 90s Color Me Badd video.

Donnarumma to Corriere della Sera: “I could have played with Neymar at Paris Saint-Germain? Now I play with Bonucci, which is not bad!” pic.twitter.com/M9BGE5hqvX

When the draw came out, Group F on paper seemed pretty straightforward that Manchester City and Napoli would qualify.  However, Shakhtar Donetsk had something to say about that on matchday 1, when they shocked the Partenopei.  With the loss at Manchester City, Napoli sit third on 3 points, 3 behind the Ukranians.

Napoli fans, if they don’t win this week at home against Manchester City, my advice is this:  Be afraid — be very afraid.

Matchday 5? City host Feyenoord and will win, putting them on 13 points.  Assume Napoli beat Shakhtar by 2 goals at home.  This puts the table at City 13 and group winners (that’s the important part), Shakhtar on 9, and Napoli on 7.

Matchday 6? Napoli will play at Feyenoord needing a win and needing City to get a draw or win AT Shakhtar.  Here’s the thing: City have the group won, and do you really think Pep Guardiola will send the likes of Kevin De Bruyne, Sergio Aguero, Leroy Sane, even David Silva on a trip to the Ukraine when they’re embroiled in their own title chase in England?

This is why Napoli MUST win at home against City.  It gives them a chance to catch Shakhtar on points on Matchday 5, and control their destiny heading to Holland on that final match day.  Let’s hope it happens.

Of course no scare list is complete without talking about the state of Il Nazionale and the regular butchering of it by their manager, Gian Piero Ventura.

Ventura largely employs his Azzurri in a 4-2-4, which on the surface would excite Italy fans and correlate with the attacking football that Italian clubs have produced.  Who at the time didn’t have their mouths watering over the prospect of a four man attack of Insigne, Belotti, Immobile, and Candreva?

With full backs bombing forward to be part of the fun.  It was looked at as the time Italy detached itself from its catenaccio reputation and got with modern times.

Here are the problems:

Oh, and Italy are not even in the World Cup yet, having to face a playoff with Sweden.  Sweden were probably the toughest draw for the Azzurri of those they could’ve ended up playing.

I can’t imagine a World Cup without Italy, yet given the ineptitude and stubbornness Ventura is capable of conjuring, I’m afraid (and braced) for the worst.