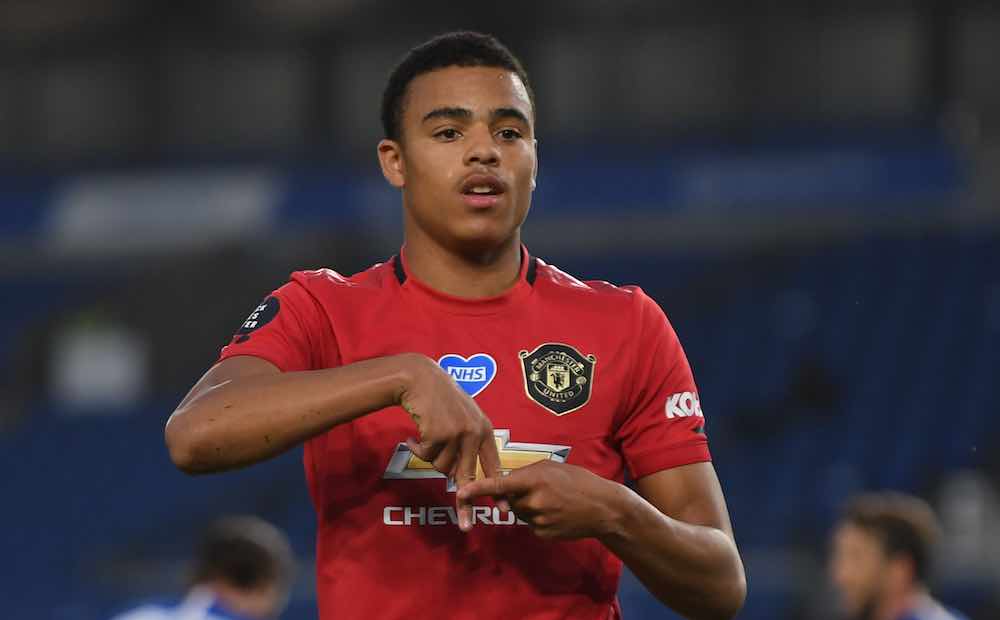 Mason Greenwood proved once again that he is one of Ole Gunnar Solskjaer’s most valuable players, opening the scoring and registering an assist in Manchester United’s 3-0 Premier League victory against Brighton on the south coast.

The 18-year-old has been in good form in his breakthrough season and is third in the club’s scoring charts in all competitions with 13.

He joins Anthony Martial, Marcus Rashford, and Bruno Fernandes in one of the most exciting front fours in the league and, backed up by Paul Pogba in midfield, this Man United team could be something special if they can get their act together at the other end of the pitch. 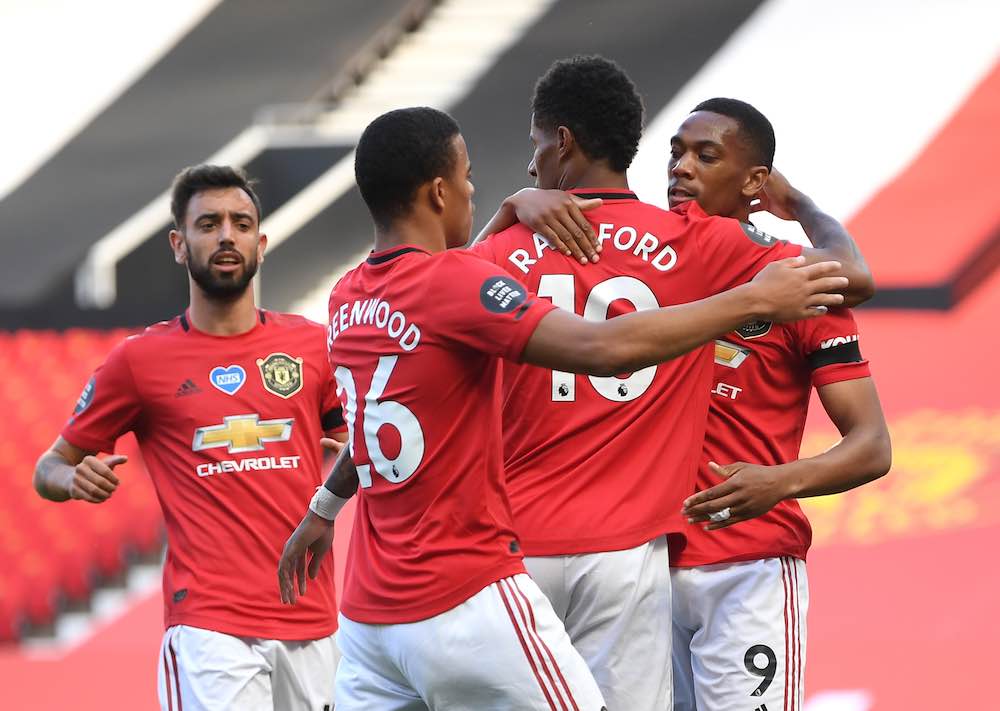 For all the optimism and hype around football’s future stars, there is always a nagging doubt that a certain weakness, or an unfortunate turn of events, might derail their progress and see them become one of the many players who will be spoken of as not fulfilling their potential.

But when it comes to Greenwood, those doubts are few and far between.

Man United’s Jimmy Murphy Young Player of the Year award has been won by the likes of Ryan Tunnicliffe, Mats Møller Dæhli, Ben Pearson, and Will Keane. While these players have gone on to have good, respectable careers in the professional game, they might not have gone as far as such prestigious awards early in their careers suggest they should have.

Other recipients of that award include Ryan Giggs, Paul Scholes, and Rashford.

Greenwood is the most recent winner of the award, and appears set to join the latter group rather than the former. He looks as close to a dead cert as it’s possible to be to become a star for one of England’s biggest, most successful, and most popular clubs.

Ever since he first donned the red shirt in a senior game, just over a year ago when he came off the bench against Paris Saint-Germain in the Champions League, he has convinced. There is a confidence to go with his ability, and a mentality that means the bigger stage and the increased responsibility it brings has not been daunting for him.

He’s a two-footed, direct attacker who places doubt in opponents’ minds thanks to the range of options on the ball his ability provides.

This also applies to dribbling and shooting, meaning he can go either way to beat a defender, cutting in to shoot or heading for the byline to cross.

His most potent weapon could be his ability to cut inside and shoot on his left foot, but that is made all the stronger by the idea he puts in the opponent’s mind that he also could go on the outside if he wanted to. 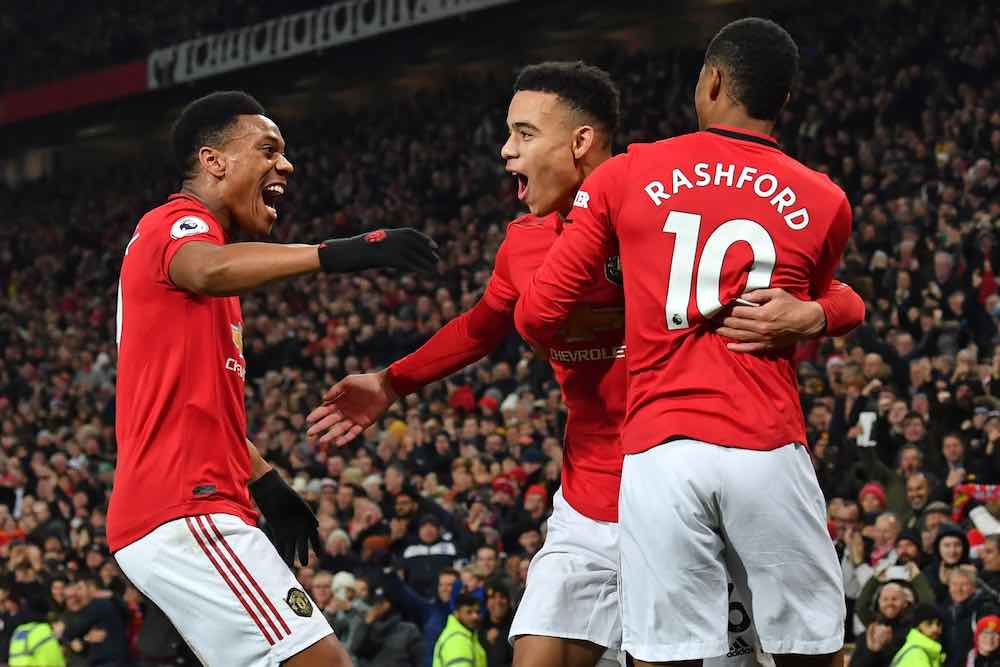 Greenwood will be helped greatly by the presence of Rashford and centre-forward Martial. Rashford acts as the inside forward from the left, himself liking to cut inside onto his stronger foot and regularly get into central areas.

Martial has flourished in the No. 9 shirt, and is level with Rashford on 19 goals in all competitions this season. The Frenchman lurks, occupies defenders, and will shoot early and often unexpectedly, as well as poaching goals around the six-yard box. This is shown below in his shot location map from InStat. 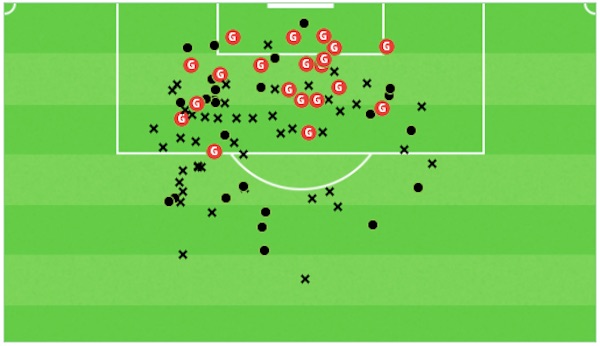 Greenwood himself can operate as the centre forward, but given the chemistry Man United’s front three have and the danger they pose when on the pitch together, this combination seems to get the best from all players at this moment in time.

Many will remember GMR as the name of the BBC’s local Greater Manchester radio station between 1988 and 2006, but for a new generation, it will stand for Greenwood Martial Rashford.

The trio are more than ably supported by an attacking midfielder who is always thinking about goals, whether that be creating them or scoring them, Bruno Fernandes has been the spark this United side needed. While Greenwood is the rising star, Fernandes is already the headline act, and will soon be joined at that level by the returning Pogba.

Add Pogba and Fernandes to GMR, and you get one of the most exciting attacking units in the league. The development of Aaron Wan Bissaka on the right means United could be sorted in that area, too, so the next step for the club is to shore things up at the back. 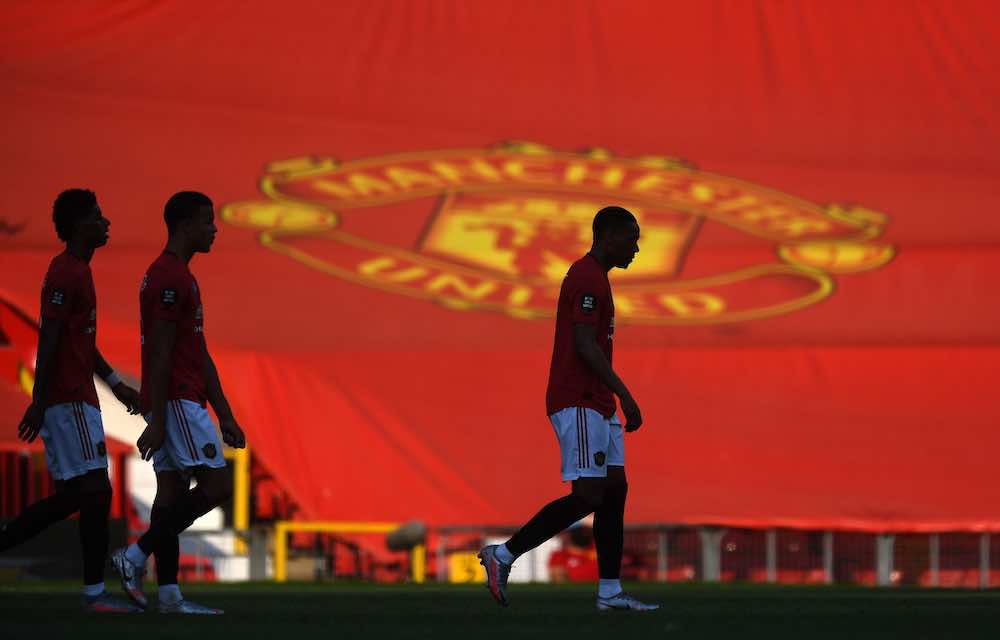 The next step for Greenwood will be international recognition, both in terms of his profile and in terms of caps for England. The postponement of the Euros until next year could help him claim a place in a squad which he might not have been able to had the tournament taken place as planned in 2020.

The three-month break in football almost felt like a reset, and what existed as football resumed was instantly the norm, but as recently as October 2019 Greenwood was still making appearances for Man United’s U23 side.

It’s easy to forget this is his first real season in and around the first team week in, week out, but this looks set to become standard from now on. As part of GMR, Greenwood will hope to get United winning trophies with a regular frequency they were once familiar with.